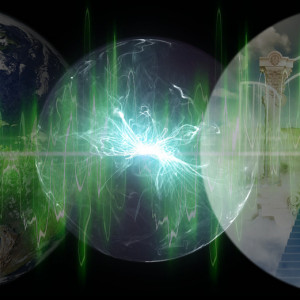 GHOSTS: MESSENGERS FOR THE DEAD?

I’ve discussed Higher Dimensional Beings in the past, and have recently given the idea additional thought and continued the conversation with friends in the paranormal field. These have led to a new idea. What if the entities we’re encountering during investigations are not the dead, but the messengers for the dead — An afterlife middleman between us and those we’re hoping to contact?

Think of it this way:

(1) We’re here in the world of the living conducting an investigation. We’re in a haunted location asking questions, hoping is to make contact with the dead.

(2) The dead are in their realm — a heaven-like world or dimension that is too complex for us to understand.

These two worlds do not touch and there is no way for the living (us) to speak directly, one-on-one with the dead.

(3) But, (here’s the big “What if”) in-between us and them is an undiscovered race of beings who exist in a world of energy. These living beings made of fluctuating energy waves live in this world overlapping ours and that of the dead. They can hear our questions and see our devices. They can hear the responses from the dead trying to answer.

The energy beings would be invisible to us since we can’t see energy waves with our eyes or they may be Higher Dimensional Beings as I described in the past, but maybe they are seen and heard by the dead.

If so, the energy beings, existing in the world between the two could hear our question, ask it of the spirit, get the answer, and finally give us that response either as an EVP or my manipulating one of the devices we asked it to light up.

That would make the “Ghost” at the haunted location the messenger of energy not the spirit of the dead.

This could be an answer to the long-standing argument: “How do ghosts know how to use modern devices to answer our questions?”

If these energy lifeforms do exist, and they are the messengers between our worlds, it could explain the fragmented responses through spirit boxes and voice recorders; and being energy-based they would be able to set off EMF detectors and similar devices.

The question to ask then would be: Then how is it ghosts only seem to “haunt” certain locations? That’s a question we’ll address in the next “What if.”

Again, “Messengers for the Dead” is a big what if, but these “What if’s” — these possibly completely fantasy, bordering on insanity and science fiction — are valuable questions to ask and entertain in our field because we have zero answers. So the old saying, “There are no stupid questions,” couldn’t be more true!

And it’s important to remember: There will not be one answer to everything we are experiencing with the paranormal. There will be multiple explanations to what Ghosts are.

Keep asking and keep exploring no matter how weird it may seem!