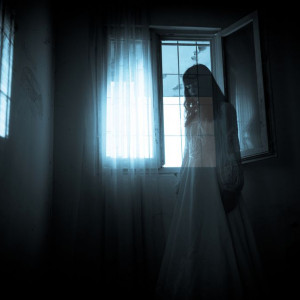 My Apartment: The Sobbing Woman

After the door experience, it almost felt as though a door was now opened (so punny) and this activity was now comfortable & aware, and would come & go as it pleased.

As known that spirits feed off of our energy & our different reactions/emotions in order to raise their energy level, I am sure our unusual reaction of excitement to the door swinging open was a major contributor to the comfort level of these souls. As well as the continuation of contact they would progressively make with us.

Although, one question that continues to circle my mind is that of residual or intelligent energy?

{Residual meaning it will playback like a record on loop occasionally. It is completely unaware that we are present, and it sort of 'frozen in time' & continues to replay certain moments of their life over and over again depending on environmental settings (meaning same moon phase, same time, same day, same experience etc. as when it occurred for them)

While intelligent energy are energies that can communicate & make contact with us in real-time, and are totally aware of our presence.}

I wonder if perhaps it was someone going about their usual routine of opening the door & walking through without the slightest bit of knowledge that we were present. But then again I have to also take into consideration the fact this energy may be trying to scare us out, or make it's presents known because it is aware of our sensitivity to it.

Another piece of the puzzle we also discovered about our apartment is that the only original part to our home IS our living room. Our bedroom & other rooms were added on later. Which has me twirling my mind, pondering why this energy would be felt so heavy in the newer portion of our house.

Fun fact: The newer portion to our place is the closest side to a sealed-over mineshaft.

This must have been a a couple days to about a week later that another very strange experience occurred. We were both sound asleep. For whatever reason I was woken up & would continue tossing & turning for the next half hour. As I was laying there glancing about the beautiful old wooden walls & watching shadows of the room play tricks on my eyes, I began to hear a strange sound.
I held my breath as it continued to get louder and louder to the point I could begin to make out just what it was.
I was hearing a woman sobbing, and then a man and woman arguing.
I sat straight up lifting my ears off the pillow to hear better.
I wasn't hearing wrong, it was definitely a woman crying. And it was coming from our window.
I glanced over to my boyfriend & our fur babies who were all sound asleep -

How was I the only one hearing this terrifyingly loud sobbing???

I slowly crept out of bed, staying low to the floor, spider crawling like in
The Exorcist.

As I crept over to the window, the strangest thing occurred.
The sound grew quieter.
I was baffled as I tried to figure how that could be.
I knew that sound had to have been something or someone outside, but now it was silent?

I stepped away from the window and heard the crying again clear as day in my ear.

It wasn't outside, it was in my house.
Right next to me.

I could feel my heart rate start to pick up as I felt this presence nearly right beside me.

She wasn't threatening, she felt emotionally wounded.
Was she even aware of my presence?
Or could she be residual? I asked myself.

I couldn't put my finger on it.

I immediately woke my boyfriend, he sat straight up, worried why I woke him & said,
"What's wrong?"
I put a finger to my mouth telling him to be quiet.

"Listen," I mumbled softly, pointing to the window.

He sat there silently with a puzzled look that quickly turned to wide eyed & confused.
He heard it too.
"What do you hear?"
I whispered, not wanting to influence is answer with my own experience.

He stared at the window, his mouth dropping slightly as I could see a slight smirk to the corner of his mouth.
"A woman... crying?
...
...And a man?"

I nodded as he climbed out of bed and crept over to the window. His finger slightly moved the blinds as he spied through, moving his head side-to-side surveying our dimly lit yard.

"I'm going outside. That's too loud to not be someone standing right out there.
Is the door locked?" he said.
He instantly assumed drunk people were wandering around & harassing or attacking a young girl.

He went outside, grabbing one of our clothes-hanging bars we had sitting around and ventured out.
He was gone a couple minutes, and I began to worry. But I knew, I just knew he wouldn't find anything.
I heard the door open and waited as he walked to the bedroom. I raised my eyebrows in question, & he shook his head.

There was nothing there.

The look I gave him said it all, and he chuckled slightly in disbelief.

We were both witness to it again.

We both sat back down in bed waiting to hear it again, but the air was still.
We waited several minutes, but nothing ever came through.

We both looked at each other & he said,
"Holy shit," with a laugh.
"That was crazy."

I laughed, and agreed with him.

We never heard that woman crying again, but still to this day I ask myself:

Why was she crying?


And who was she?